Names of the Sovereign

Anyone seeking a practical grasp of the names of God soon discovers a universe wherein these names reside. This book explores only the periphery of that multifaceted expanse. It does not claim, in any schol­arly way, to be an exhaustive reference. For that type of study we point to several excellent works such as Names of God by Nathan Stone, The Names of God by George W. Knight, and Praying the Names of God by Ann Spangler.

Herein we have chosen to use certain of these names, pregnant with purpose and rich undertones. As one angel within this book says, “Our great and worthy Sovereign is too exalted to be encapsulated by a single name. Any such name that may be offered would immediately limit Him as the syllables roll off the lips of the orator.”

A student of scripture knows that truth is established by examining every letter of Holy Writ; the order in which the letters are linked; the precise accenting of the phrases and syllables; the language in which it is written; and expertise of the hand that wrote it, while judging these by the complete Writ. This is particularly true when seeking under­standing of the names of God.

Here we introduce just a few. Our hope is that these few might help our finite minds explore some of the infinite height, width and depth, the true magnitude of the three Ones. The names we use, listed with some of the meanings determined by experts, follows. We have also included a brief explanation, as well as, some new understanding that you will find incorporated in this book.

The All-Powerful One, Creator

His name, Elohim, along with the names Adonai, and El Shaddai, reveals much of our creator, God. We chose to begin with this name because it is the first name in scripture and the first name God chose when He began revealing Himself unto us.

The word Elohim is the masculine plural of El (or possibly Eloah). This name, in Hebraic thinking, only occurs in Hebrew and does not occur in any other Semitic languages. The plural ending, though, does not mean “gods” when referring to the God of Israel. When used, in conjunction with the singular verb forms, adjectives, and pronouns in the scripture, it promises a unique concept. However, considering the Hashalush HaKadosh (Trinity), the form indeed allows for the plurality within the Godhead.

Each use of this name within The Angel Chronicles conveys all that is presently accepted when this name has been used in scripture, plus some new understanding. Our usage portrays the three Ones, acting in such unity, that witnesses to the occurrence cannot tell which of the three Ones it is.

Adonai is also plural, like the name Elohim, identifying the Trinity. The name reveals the foundational authority of each of the three Ones and their eternal stature as the unparalleled Sovereign.

Nathan Stone in his book Names of God underscores Adonai conveys ownership, or mastership, of those Elohim created…the idea of a mas­ter-slave relationship.

In The Angel Chronicles, when a character mentions the title “Lord,” we could have correctly used the name, Adonai, and combined it with the name Elohim. However, we kept it simple for the sake of readability. When we do use the name, Adonai, it’s because its use is essential to portraying the authority of God to act as He does.

The All Sufficient One, The God of Mountains, God Almighty

This, the third name of God which identifies the plurality of the Godhead, denotes the mightiness of the three pre-existent Ones. We believe this compound name actually portrays the divine personifica­tion of grace. It is likely the name that Elohim chose for Himself. Other than referring to Him as Elohim, we speculate that the angels likely use this name, El Shaddai.

It is the intimate name for Yehovah. Some experts suggest that it is similar to the English word Papa. The word Papa is not meant irrever­ently or to lessen His stature. If the practice of using “Papa” leads to a reduced reverence, it should not be used, at all.

The Word of God

The second person of the Trinity. In searching for what Yeshuah’s name might have been before creation, we settled upon this name. Weeks later we learned that Revelation 19:13 teaches that Yeshuah is called by this name. The One that Adam and Eve refer to as Yehovah is referred to, by the angels, as Dvar HaElohim.

I AM, The one who is the Self Existent One

The first person of the Trinity. It is the formal name for Abba. There is much controversy surrounding this name which has led to much misun­derstanding about Elohim. After creating all things, Elohim conveyed certain names as a means to reveal Himself. Since early in man’s his­tory it has been necessary to discipline His creation. The name Yehovah had become associated, incorrectly, with a vengeful God rather than a God inviting intimacy.

We now believe that, in scripture, both Abba and Dvar HaElohim are referred to by this name. However, we propose that when referenced as Dvar HaElohim, it occurs because He in that instance is assuming the mantle of the Father. Thus He is demonstrating the application of the scripture which states, “When you’ve seen the Son, you’ve seen the Father.” 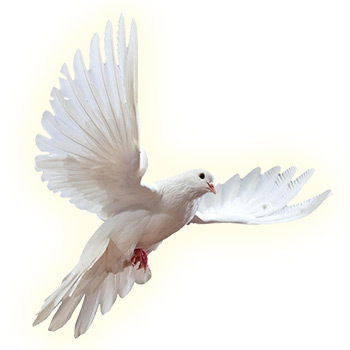 The third person of the Trinity. In reality it is the person of the Trinity with whom man interacts the most, but is least recognized as God. Man chooses to de-deify Him and therefore becomes blind to His presence. For example, what man terms “Mother Nature” is in reality “The Spirit” fulfilling His responsibilities.

An interesting side note is, this person of the Trinity is the easiest to insult. Many revivals end because the Holy Spirit is insulted or quenched.

Seven Ministries of the Holy Spirit

The Seven Spirits of God mentioned in The Angel Chronicles is the name of a specific revelation of “The Spirit” or HaRuach. This par­ticular revelation identifies the seven ministries HaRuach performs. Some are transparently revealed in the Hebrew Scriptures while some are mentioned outright but maybe as a different name. However, these same ministries are openly declared in what is called the New Testament. A complete study of them is impossible within these pages.

We are convinced whenever “The Spirit” is mentioned in scripture it is referring to HaRuach’s seven ministries acting in concert. This is similar to the scriptural treatment of Elohim, Adonai, and El Shaddai.